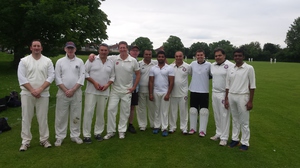 Welcome to the website of the Gentlemen of West London Cricket Club.

The club was founded in 1988 by Mark Wynford Harvey Ashton, who dominated the club’s early and middle years, and a group of friends from the University of York who at the time were living in West London. The team was boosted by Mark’s younger brother Bob and sundry friends. Aside from the Ashtons, the early sides were abundantly untalented (the first seven games were lost) but the spirit was good and rewards were achieved with a brave draw and a win in July 1989. A few short weeks later, Bob Ashton died just 24 after a brief illness, causing grief beyond computation to his family and friends. GWLCC carried on though, inspired by Mark’s vision and energy, and will do so for a long time to come.

This site is continuously being updated with reports and statistics charting our history but please look around the content already added. If you would like to play us email the Secretary: